Albany, NY – Today, a coalition of more than ninety organizations from across New York called on Governor Cuomo and the state legislature to pass the Safer NY Act, a legislative package that includes a bill to repeal 50-a, New York’s harmful police secrecy law.

A coalition of 88 police reform groups are making a hard push to scrap a decades-old state law that keeps officer discipline records secret.

The groups — many of them working under the banner of Communities United for Police Reform — will send a letter Tuesday to the state legislature calling for a series of police reforms, including the repeal of 50-a — a 1976 statute that limits public access to police and firefighters' disciplinary records.

Albany, NY - Today, members and leaders of Communities United for Police Reform held a press conference and rally in the state capitol calling on the state legislature and Governor Cuomo to pass the Safer New York Act and repeal 50-a, New York’s harmful police secrecy law.

The Safer New York Act is a package of bills that would increase police transparency and accountability, and enhance public safety in communities across New York. 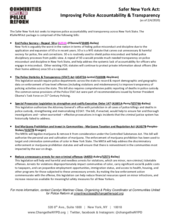 Legislative body passed bill to codify and strengthen executive order establishing Office of New York Attorney General as special prosecutor in police killings, and requirement for the state to collect data on policing by local departments across state

Police departments would have to report more about arrests and the deaths of people in custody under legislation pending in the New York state Legislature.

Advocates for criminal justice reform and their legislative allies detailed the bill Tuesday.

The measure sponsored by Assemblyman Joseph Lentol and Sen. Daniel Squadron, both Democrats, would require police departments to follow a single, statewide process for reporting information about everyday arrests — as well as cases in which a person is killed while in custody.

After Budget with No Criminal Justice Reforms, Advocates Call for New York to Lead Nation by Prioritizing Modernization of Police Data Reporting

Leaders and New Yorkers from across state urge legislature and governor to lead on justice, public safety and transparency

Advocates from Communities United for Police Reform and other organizations from across New York were joined by Assemblyman Joseph Lentol and Senator Daniel Squadron to call for the prioritizing of criminal justice reform that advances transparency in the post-budget legislative session. Specifically, the group called for the passage of the Police-STAT Act (A.7698/S.6001), legislation sponsored by Lentol and Sqaudron that would requre state government to publicly report vital information about policing across the state.